If you’re a fan of Ultimate Fighting or the UFC you most surely know about the Ronda Rousey/Holly Holm fight.  Holly Holm won the fight, and she’s the new champ.  However Anthony Roberts, supplement guru,  posted something really interesting about Holy Holm on Facebook.  Check out this picture. 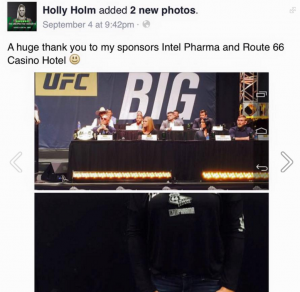 As you can see this is a post from Holly Holm’s Facebook page.  She’s thanking her sponsor Intel Pharma.  “Intel-Pharma??”,  I thought to myself, “Who the heck is Intel-Pharma?”  So the next thing I did was go over to Intel-Pharm and had a look at what “supplements” they are selling and found they are selling something called SARMS’.  Sarms as defined by this site is…

SARMs, or Selective Androgen Receptor Modulators, are a new class of anabolic compounds that offer all the benefits of the more traditional forms of steroids but with only a small number of the possible side effects normal steroid use brings. In my expert supplement opinion, everything about this screams misbranded and violating the FDA 111’s.  If the FDA saw this, they would, in my opinion, force a recall immediately.  This company is labeling the SARM’s as a supplement (as you can see the supplement facts panel) but then have the big red disclaimer saying it is not a supplement.  That you should not even consume it!  Crazy.

That leaves me asking a bunch of questions.

This whole thing stinks now….I don’t like the fact that Holly is associated with this company that is selling research chemicals but label them as dietary supplements.

I think there might be a fall-out from this.  But you know what the funny thing is?  Intel-pharma is going to make a lot of money quickly from this, and then they should high-tail it out of the country because the FDA is going to be coming after them and it isn’t going to be pretty.

Remember the FDA fined Bodybuilding.com hundreds of thousands of dollars for selling prohormones and the owner millions of dollars. 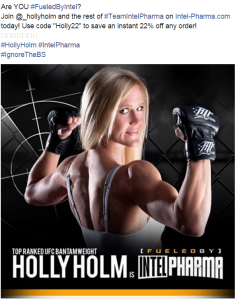