View cart “Advanced BCAA” has been added to your cart. 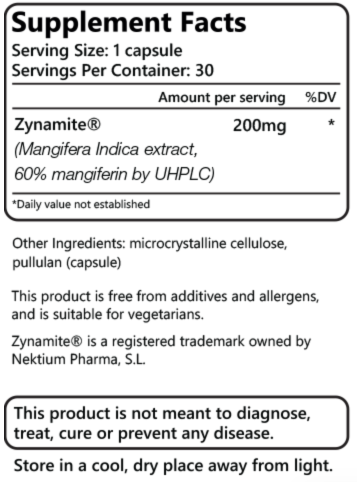 Suggested Use: As a dietary supplement, take 1 capsule once or twice per day. Do not exceed 4 capsules in any 24 hour period.

Imagine an innovative natural ingredient that replaces caffeine and has none of the negative side effects associated with caffeine.

Mangifera indica, the common mango tree, is cultivated extensively in the tropical and subtropical regions of the world. Infusions and decoctions of mango leaves are used extensively in traditional health systems and have been known for centuries for their health benefits.¹ ²

In our continued effort to stock the highest quality and cutting-edge, science-backed natural compounds in existence, we are very excited to be one of the first to stock Zynamite® extract capsules in the world!

Who is Zynamite® Pre Workout Capsules for?

Stressed or fatigued people lack enthusiasm and mostly feel exhausted and desperate. What they desire is a sustained boost of energy that improves physical performance, concentration, attention, alertness, and mood.

Because of the mental energy and focus provided by caffeine, billions of cups of coffee are consumed daily to assist people to cope. However, caffeine is addictive and most people consume too much of it and suffer from its negative side
effects and withdrawal symptoms.³ These side-effects don’t exist with Zynamite® based on studies.

Zynamite® gives sustained mental and physical energy and focus without any negative side effects of caffeine. Zynamite® is patented for enhancing brain activity.

The active principle of Zynamite® is mangiferin, a natural xanthonoid polyphenol. Ultra-high-performance liquid chromatography (UHPLC) with photodiode array detection (PDA) is used to provide high-resolution separation, identification, and quantification of Zynamite®’s mangiferin – with Nektium leading the industry for this extract.

Zynamite® has been studied in 4 randomized, placebo-controlled clinical trials – 2 for mental energy and 2 for sports performance.

In a follow-up confirmatory study, 30 young athletes (13 women and 17 men), 140mg of Zynamite® was administered every 8 hours for 48 hours, but this time in two separate combinations: 50mg luteolin and 600mg quercetin.

The combination of Zynamite® pre workout capsules with quercetin increased peak power output by 19.4% compared to placebo. Both formulations increased mean power output by 6% during repeated ergometer Wingate tests. Zynamite® improved VO2 peak by 5%, with a corresponding increase in brain oxygenation of 10-12% in women.⁷ (Figure 2)

The results from these two studies demonstrated that formulations containing Zynamite® have an even stronger effect than those published for caffeine, in addition to a significant improvement in peak power output.

The next two studies focused on mental energy. The first used a single dose of 500mg of in 16 participants (7 men and 9 women).

Zynamite® had no side effects and no change in heart rate variability or blood pressure over the course of the study-variables typically affected by caffeinated products.

During performance of two cognitively demanding challenges, a Number Sequence Test (NST) and a Number Connection Test (NCT), Zynamite® had a significant activating effect on the brain compared to placebo as determined by frequency analysis of the changes in electrical activity across six brain wave frequency ranges (colour coded) in the EEG of the association cortex (change from time-averaged baseline assigned as 100%) ; significance values: ** p<0.05, *** p<0.001. (Figure 4)