Home
Uncategorized
This Piece of Paper Means A Supplement Sucks Or Is Great…..
Share Tweet Pin it

There is a giant scam going on in the supplement industry, and it involves lab testing.  Let me run this federal law by you and make sure this sticks in your head.

That means for every batch ran by a supplement company they must perform multiple tests on it.  Here is an example of the tests that we perform on a product before we can sell it to you.

If you want a high quality supplement that is tested to prove that it is legitimate you first of course ask the supplement company for their FDA registration number.  But then to be extra sure you ask them for a 3rd party lab analysis with their name on it.  Not their contract packager.

Finally there is a website called Labdoor, which GRADES supplements with supposedly actual lab tests.  However they do not display the actual lab tests anywhere on their site.  At least I couldn’t find them.  Which is suspect to me.  Why cant you show the actual lab results?  My guess is that they are an actual lab and they just do the testing themselves.

As you can see the CEO of Labdoor also founded this lab called Avomeen. 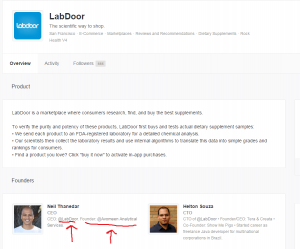 If Labdoor wanted to, actually HELP the consumer make wise supplement purchases they would first verify that the supplement company is registered with the FDA, which is required by law.

In my opinion, Labdoor is a half-ass site, which is just set up to make money with affiliate commissions.  If they were actually testing the products they would post the actual lab results.