An article by Anthony Roberts

Why Your Protein Container is Half Way Filled

Another group of class action lawsuits has begun to emerge in the dietary supplement industry – this time for slack filling. If that term is unfamiliar to you, don’t worry, it’s not as complicated as amino spiking (which you should be familiar with by now).

That’s called slack fill. Currently, two lawsuits have been filed against major supplement manufacturers for slack filling their products. We’ve all been there -you buy a big tub of protein and it’s a little more than half filled. Yes, you still get the same number of servings indicated on the facts panel, but you’re also paying for a lot of empty space in the package. And that’s the problem, because the package itself is a form of advertising, especially when people see them lined up next to each other, and one jug is huge compared to another. So at it’s heart, a class action lawsuit for slack filling (which may be an unfamiliar term to most people) is a lawsuit that involves false advertising and unfair competition, and a bunch of other (more familiar) terms.

The Federal Food Drug and Cosmetic Act [(FDCA), 21 U.S.C. §§ 301 et 27 seq ] is the applicable set of regulations that govern the sale of food and dietary supplements (the Dietary Supplement Health Education Act, or DSHEA, it should be noted, is also applicable, but simply modifies or adds to the FDCA, in most cases). However, and more specifically, the Code of Federal Regulations [21 C.F.R. §100.100 ] applies to slack fills – and states (in laymen’s terms) that a slack fill is misleading when it is non-functional, and certain other conditions are not met (*i.e. some bags of protein have a clear window that allows the consumer to actually see the amount of product in the container).

What’s a functional slack fill? Here, we’re talking about things like the excess air in a potato chip bag, that helps prevent damage to the product. Obviously there are other exceptions that account for the manufacturing side. For example, you generally can’t use a 3lb bag (meaning it holds 3lbs of product) when you’re selling exactly 3lbs of product. The bag needs to be filled, then heat sealed, which often can’t be done if it’s filled to the brim. There are also exceptions made for settling during transit and storage – when a jug is filled, some air gets in, and the product will present itself at a greater level until it settles a bit.

So how much empty space is allowed? While there’s no hard and fast rule that automatically requires or allows for corrective legal action, a a deputy district attorney in Shasta County, Calif., speaking to Consumer Reports in 2010,  said  that her D.A.’s office won’t go after a company unless its packaging exceeds 40% nonfunctional slack fill. In both of the recently filed class action complaints, the packaging exceeded that 40% threshold.

The best way to understand these rules is that appropriately sized containers have to be used, or they give a misleading representation to consumers.

I’m somewhat torn on how I feel about these lawsuits (personally, not in a legal sense), because the person who buys protein powder isn’t an average consumer who doesn’t read labels – they’re a consumer who is highly likely to read the facts on a product (i.e. perhaps they are not the “average” or unthinking consumer). However,  in this case, as I understand the FDCA, misleading packaging does not require that someone has been mislead, just that it’s possible that someone who sees a bigger container will rightly think that it contains a greater amount of product. 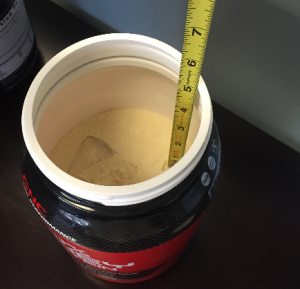