A Colombian fitness model, trainer and bodybuilder.  Anllela Sagra is known for her fitness program and is sponsored by 1UpNutrition. 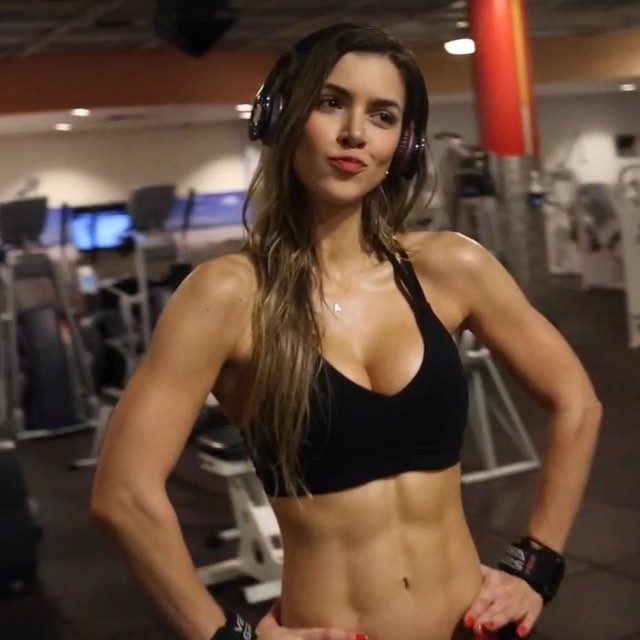 Anllela Sagra has an Instagram page with over 1 million followers.

Anllela Sagra was a fashion design student who would model a few times a week.  What started as an attempt to further her modeling career, she started working out.  She fell in love with weight lifting. As the passion grew, she began working out regularly.  The results led her to understand the human body more thoroughly and how it responds to new or different training programs.

Many people told her to stop the working out.  That it would ruin her modeling career. She made the difficult decision to not listen, and to follow her passion.  She worked hard and gained more and more confidence in the gym. This led her to entering fitness competitions.

Anllela Sagra has a Youtube Channel but it looks like she has not posted a video in over 2 years.  Not sure why she stopped making videos.

Here are some questions and answers that I found in a video she answered.

In 2013 Anllela Sagra entered her first fitness bikini competition.  She finished 3rd place.  Since she had only been in the fitness world a short time, the results surprised her.  What surprised her more were the comments from the big names and judges. This success combined with the passion led her to the tough decision to move from modeling to fitness modeling full time.

She believes that there is no such thing as luck but opportunities.  It is your decision if you want to take a chance on them. She decided to take the opportunity and jump into the possibilities and believes that it is the best decision she ever made.

To work her lower body (working the glutes is her favorite) Annllela focuses on more classic moves such as squat variations, deadlifts, hip thrusts and weighted kickbacks.  She uses these as her main building blocks for building an athletic physique.

For upper body exercises, she uses lighter weights and even her own body weight.  These exercises can include push-ups, pull-ups, bicep curls along with shoulder presses.

To help create a strong core she will do exercises such as hanging leg raises and crunches.

These philosophies combined with dedication and discipline has made Anllela Sangra a household name.  Not just in Brazil, but around the world.

Since 2013 Anllela has been inspiring many people with their own fitness journeys.  This is evident with her many followers on social media. In less than a year she had more than one million followers.  Anllela has created several workout and fitness programs to help people reach their fitness goals.

She is sponsored by a bunch of supplement companies that sell protein powders and other various muscle building supplements.

Do the work.  See the results.