There are two supplements that could help you target belly fat, fucoxanthin and oligonol.  “Wait a second you might be saying to yourself, “target” abdominal fat?”  You should know that there is no such thing as “spot” fat reduction.  Doing 1,000 crunches a day will not TARGET the fat covering your abs either.   Buying the latest bogus “ab machine” from QVC or the Home Shopping Network won’t work either.    The problem with this is, that most of the time abdominal fat is the LAST place you’ll lose the fat when you diet.  If you want abs, you have to get your body fat down to very low levels which are very, very difficult.  To date fitness experts, scientists, researchers, exercise guru’s and doctors have not figured out a way to “target” abdominal fat.  Most of the time they lie and tell you they have found a way, but in reality, you cannot TARGET where you want to lose fat.  Well, I found something that may change all of this and a way to target abdominal fat.  I have found a way in which you might be able to target abdominal fat effectively because my knowledge of dietary supplements and how they are manufactured.

You see each category there is one ingredient that works the best and by using a supplement from each category, you will support a better chance for fat loss.  However, I did leave out one category that I’d like to tell you about.  That category is “mid-section fat loss”.

Mid-section fat loss?  Hard to believe I know, but there are two very interesting nutraceuticals out there with good research behind them that results in mid-section, abdominal or “belly” fat loss.

“Thinogen Fucoxanthin is a natural carotenoid specific to several different types of brown seaweed.  Fucoxanthin is the first marine algae-derived ingredient with a clinically proven thermogenic effect and can be used for weight loss. Metabolic and nutritional studies have demonstrated that fucoxanthin promotes fat burning within fat cells [2].

Unlike other weight loss products like caffeine, ephedra and synephrine (that also add toxins to human body), fucoxanthin can help boost the fat metabolism rate without stimulating a person’s central nervous system, thus helping to ensure that weight lost does not creep back.

Fucoxanthin implements body fat and weight loss effect through two different mechanisms. Study of more than 200 obese rats and mice fed fucoxanthin showed that fucoxanthin upregulates gene expression of mitochondrial uncoupling protein 1 (UCP1) which is responsible for conversion of energy to heat through fat oxidation (Figure 2 & 3). As UCP1 is found in white adipose tissue (WAT) and the abdominal area contains abundant adipose tissue, fucoxanthin is particularly effective in shrinking oversized guts [2]. Fucoxanthin is the first natural food component that has been shown to reduce fat by targeting the UCP1 protein. 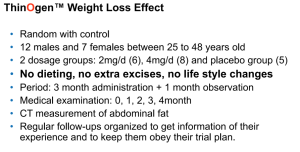 Studies suggest that stacking fucoxanthin with CLA is more effective. 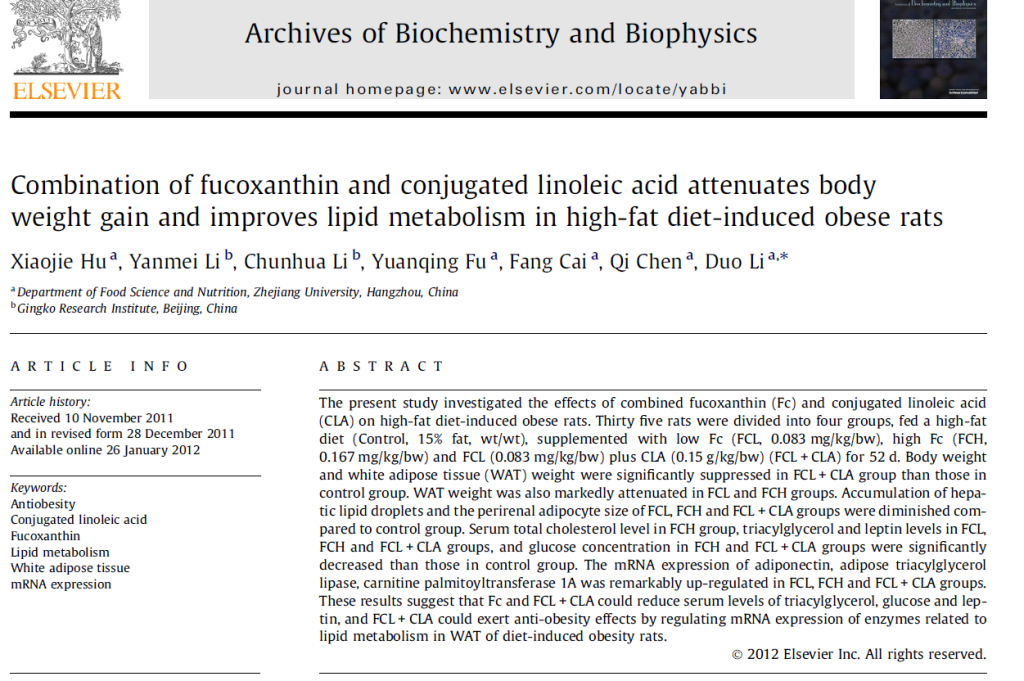 Therefore, get yourself a good CLA product to stack with Thinogen.

Let’s keep stacking this and make it really awesome!

In addition to stacking with CLA, you can add MCT to further support fucoxanthin abdominal fat loss capabilities.

Here is the study suggesting to take MCT with fucoxanthin. 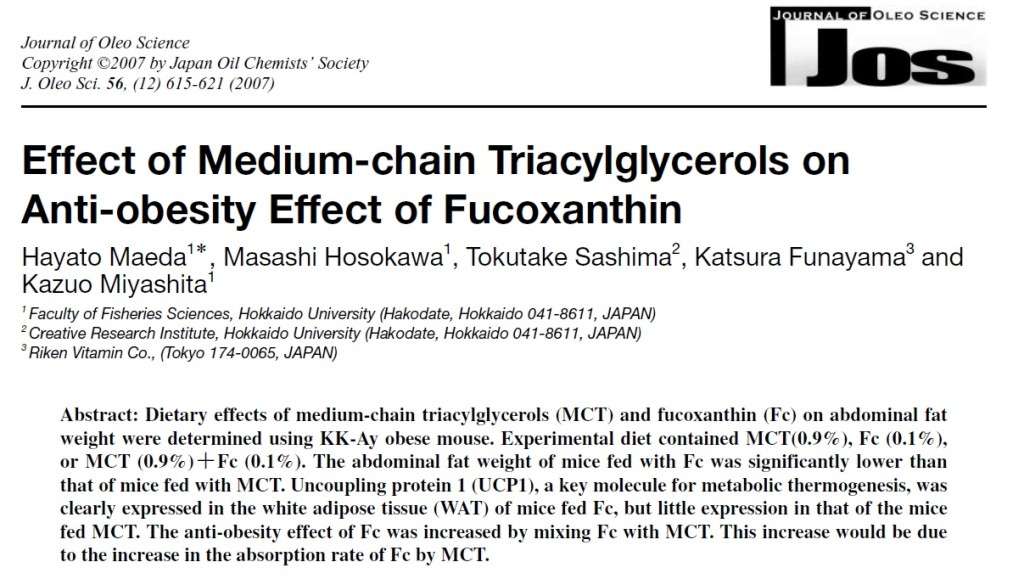 Therefore, your daily stack would be

Get this MCT oil

Where do you get this product if you want to try it.

Before I tell you where to get Thinogen (fucoxanthin), it is important to know that there are hundreds of bogus fucoxanthin supplements out there.  Mostly made by fly by night companies that take advantage of the research and information that supports Thinogen.  This is a very common scam in the supplement industry.  Most of these low-quality fucoxanthin supplements probably do not even contain fucoxanthin even though it says it on the label.  If you don’t believe me find yourself a fucoxanthin supplement and contact the company that makes it (good luck even with that).   If you do happen to get a response, ask them for a 3rd party lab analysis that PROVES there is fucoxanthin in the product.  This is not optional by the way; it is a federal law that a supplement company must have this document(s). Ask for the identity test and 3 party lab test.  The most common answer a supplement company will give you is that they do not have one, it is proprietary information, or they will provide you with a bogus certificate of analysis.  Anyone can obtain a certificate of analysis (even you) simply by calling up a fucoxanthin supplier.

To get REAL Thinogen I contacted the company that makes it (Thinogen) to find a supplement company that actually legitimately uses it.  Believe it or not, they only recommended ONE supplement company to me.  Here it is.  You have to buy at least 6 bottles.  You MUST be on this product for 3 months in order to see any results.  That is why I’m telling you to buy 6 bottles.  Anything less and you’re not going to see any results.  This product is 2m g per capsule and you need two capsules a day

The second part of my “Abdominal Fat Loss Stack” is a product called Oligonol.  I must say this is a helluva product.  It is actually the world’s only pre-digested super fruit.  It is a highly absorbable product.  Similar to a hydrolyzed whey protein.

The research behind Oligonol is awesome.  Much effort and dollars went into this product to prove how effective it can be.  That being said, Oligonol is effective at supporting a reduction in fat around the waist. 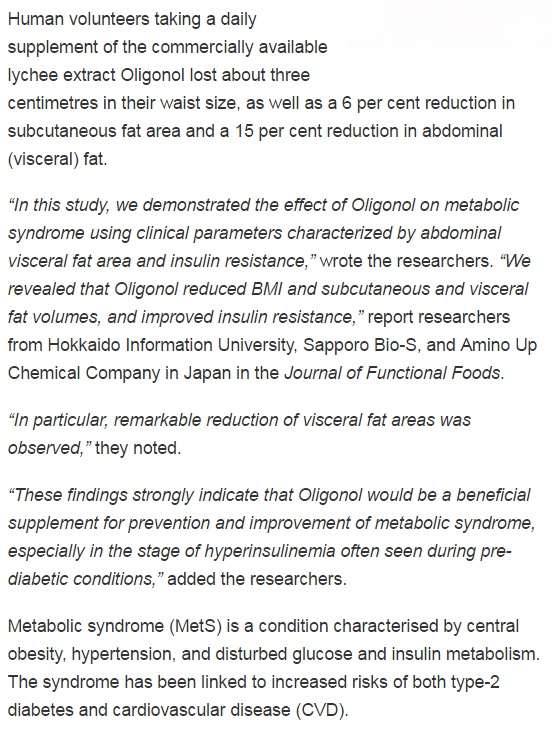 I suggest getting 3 bottles of Oligonol to last as long as the fucoxanthin.  I researched the company that makes this product.  They are right next to me in N.Y.  (I’m in N.J.)

Here’s the brand to get.

For the Abdominal Fat Loss Stack.

For more info on fucoxanthin supplements and studies check this out. 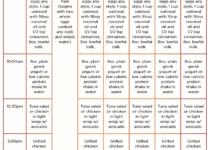 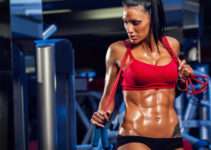 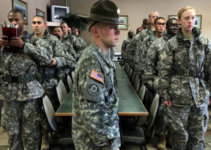 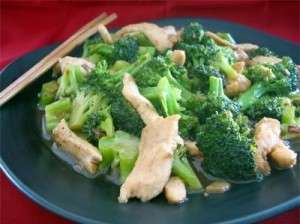