Home
Everything You Wanted To Know About BPC-157

BPC-157 is a peptide research chemical that is very popular in the muscle building and bodybuilding community.  Keep in mind this product is not a SARM (select androgen receptor modulator) There have been many breakthrough discoveries made in the past concerning almost every field in life including medicinal field. Along with the progress of many medical care equipment’s and medicines, there has been an increased research on the role of dietary supplements and vitamins. There is also a special field dedicated to special boosters which take an active part in the healing of your body. So for instance if your body has suffered an injury and you want to recover faster, this liquid will increase the efficiency of your body to heal. One of the many famous healing substances is BPC (Body Protective Compound)-157.

If one is looking to purchase BPC-157, as of July 17th 2019 I am recommending Paradigm Peptides. 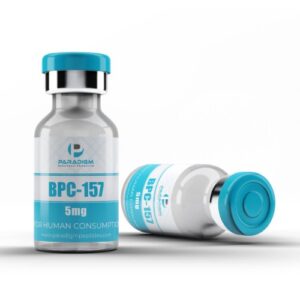 BPC-157 is a pentadecapeptide which is a composition of 15 amino acids found in human gastric juice. It has been discovered that BPC-157 plays a significant role when it comes to healing various wounds suffered by the body but mostly it has shown noticeable results in healing tendon. This is a protein booster that was initially made to help with inflammatory bowel disease as well as gastric ulcers. However, with consistent research it has been established that the healing properties of BPC-157 are not limited and they can also help with intestinal re-sectioning in addition to reattaching muscle to tendon.

BPC-157 is not found in the body rather it is made from synthetic compounds. After being tested on rats it has also been tested in a laboratory to ensure that it does not have adverse effects on the body. This medicine has rejuvenating properties for the human body and has shown improvement of organs overall. It has shown dramatic improvement in ligament healing as well. Besides that, it is more widely used for bone to tendon healing for stronger muscular activity. When it comes to muscle tears, BPC-157 showed quick effects regarding the recovery.

There are also many preventive effects of using BPC-157. It has shown a reduction in the counter effects of other medicines or NSAIDS that include ibuprofen and Advil. These NSAIDS can damage the lining of gut which can be prevented with help of BC-157. Another important role that this modern-day supplement plays is in the healing of periodontitis which is the inflammation of gums. In short, the positive effects of BPC-157 are not limited to one part or organ of the body and it can steadily help in restoring the health. It has healing properties that will develop your body overall.

BPC-157 is not a recent drug but due to its synthetic nature it has not been widely used in the past. However, it is starting to make its appearance in the world of supplements. Although, it is not independently used as a supplement, it is used as an ingredient in a few of joint support dietary supplements. It is not only beneficial in relation to providing restoration of bones and muscles but also prevention from various related diseases.

Another important factor about BPC-157 is that since it reduces joint pain, it can also be used by elderly people who are more accustomed to undergo body aches. It will help on controlling the pain that is caused by an aging body.

The most important role that BPC-157 plays is in the bodybuilding. The main tissue responsible for collagen production and angiogenesis is the granulation tissue. Vessel formation or angiogenesis can slow down in case of injury or aging. Usually, as bodybuilders grow old, they need support for the restoration of the process of angiogenesis and therefore BPC-157 is used. As established, BPC-157 contains high level of healing properties for muscles and joints which relieves pain that is experienced by bodybuilders and heavy lifters. Many of them have personally testified that this medicinal supplement has been effective in eliminating the pain.

BPC-157 can leave long-lasting impact on your body that will help in restoration and rejuvenation of muscles and other organs. In order to benefit from the long-term effects, one must complete the recommended cycle of intake. Usually, it is injected like insulin in your body which helps in restoration of muscles. Typically, one must complete the cycle that lasts for four to six months in order to have long-term advantages of BPC-157.

BPC-157 can be taken through two methods:

When it comes to taking it orally, you simply have to spray the compound in your mouth through the syringe. This method should be performed with proper care to avoid any mouth injuries.

It is important to keep in mind that it is still a recent medicinal compound that is becoming common with time. This is why the dosage is not set but merely estimated. It is recommended that that a person who weighs 250 lbs can take 180ug, 110ug for 200 lbs of weight and 6ug for 150 lbs. It is recommended to take a prescribed dosage to complete your cycle.

It is stated that BPC-157 has many benefits for the overall human body. Following are some of the positive effects that have been noted with the use of BPC-157:

BPC-157 protects against hypercalcemia and hypermagnesemia. In case of calcium or magnesium overtake; BPC-157 will fight against the imbalance to protect from adverse effects.

Gastric or peptic ulcers are caused sores on the upper portion of small intestine or the inner lining of the stomach. Usually, use of NSAIDS like naproxen or advil can cause gastric ulcers. BPC-157 can heal these gastric ulcers especially with continued use.

Another disease that can be healed or prevented from causing too much damage with help of BPC-157 is diabetes. It has shown to heal skin wounds that result from diabetes as well as high blood pressure resulting from fructose in foods.

An interesting property of BPC-157 is that if you are suffering from low blood pressure, it will increase it whereas it will decrease high blood pressure. Ultimately, it will improve your overall health and lifestyle.

Alcohol intoxication can cause inflammation in the gastric lesions or liver. It can cause many health risks as well. With help of BPC-157 you can reduce the negative side effects of intoxication.

Hyperkalemia or potassium overdose can also cause many cardio muscular diseases and can result in a heart failure. BPC-157 helps in maintaining normal potassium level too.

BPC-157 is still a drug that is found in its synthetic form, therefore, it is not WADA approved as of now. However, many studies in the past have been conducted on rodents to establish the perspective that we can use for further establishment of facts. The research itself is still in phase two which means that it needs to be tested on human beings before we can be sure of its effects. Besides the given facts, some people have made use of it and testified it as a useful medicinal drug which can be used as information to round up the overall performance of BPC-157.

However, it should be taken into view that the drug is still in its early stage with remote reviews from people all around the world. It has mostly been conducted as an experiment on rats or rodents but due to positive results, it has been taken as a green sign.

It has been noticed that antidepressants also include anti-ulcer properties. Medicines used for ulcer and depression shares some properties therefore BPC-157 has also been under observation for concluding whether it can also help healing depression or not. According to a lab test examined on rats, it was concluded that rats with chronicle stress were showed more mobility. This experiment was a forced swimming test which established that BPC-157 increases mobility in a shorter time span compared to other medicinal drugs used for depression.

With the research that has been performed until now, there have been no adverse effects of BPC-157. Sometimes, people might feel “nauseous” or “sick” but this has been stated to be a symptom of usage or your body getting used to the medicine. Otherwise, it is 100% safe to use and contains high level of healing dosage that will relieve your organs. It is going through clinical phase 2 of under observation and no side effects have been reported until now.

Usually, if you continue to complete the prescribed cycle of BPC-157 it will show results within a week. It has been said to induce desired results as soon as you inject it. It starts to relieve the muscle that you have injected it in. However, the results might vary depending on the dosage, continued use and age of the user. In a nutshell, you will see significant results in your body movement within a few dosages. Its impact is fast and noticeable.

BPC-157 is a drug that can be concluded to contain many positive effects on the human body. It has been tested on rats and the results have only been positive. It has shown to control blood pressure level, potassium imbalance, diabetic problems etc. In addition, it also shows improvement in injuries such as intestinal wounds, skin burns, tendon muscles, nerves etc. With BPC-157 you will see improved results of healing.

A major use of BPC-157 can be the help for withdrawal from drugs used for relive from depression and anxiety. Some people tend to grow dependant on anti-depressants, morphine or dopamine but with help of BPC-157 dependency can be decreased noticeably. It helps by relieving the patient from depression and providing them with mobility.

BPC-157 does not only help in healing but also prevention of development of diseases. It is also very useful regarding inhibition of alcohol. If someone is suffering from alcohol intoxication they might also see other symptoms which can damage their overall system. However, BPC-157 will heal their body and help them recover.

Last but not the least; it has an important place in the sports. It will heal injuries faced by players, bodybuilders and heavy lifters. It is especially useful for aging players since with age, healing system slows down and body takes longer to recover.

If used properly, it can help the elderly with gastric inflammation too. It can also help their organs in feeling more restored without causing any damage.

In conclusion, BPC-157 is a medicinal drug that can be useful for many people. Since there are no negative effects of using it, it is also safe to use.

After going through reviews of several people who have shared their experience of BPC-157, it can be concluded that mostly it has positive effects. It has shown to improve the rejuvenation of injuries that some people had suffered. It has also been said to be helpful for bodybuilders who have to heavy lift. In short, it cannot be negated that BPC-157 is a useful medicinal drug. However, due to the lack of experimental data on human beings, a verdict cannot be established. There is no evidence that negates the positive effects of BPC-157 but at the same time, there are no medicinal results of its positivity. The individual experiences of people are available to induce whether you want to use it or not.

Since there is no proper and final verdict from verified sources or verification from WADA, it is still under review at scientific laboratories.

In the future, we can expect that there will be proper laboratory experiments held that will verify its use for human beings too. Since it is packed with so many healing properties, we can assume that it will have a significant position among supplements.

There is some research on the healing of this chemical

As of February 13th, 2019, my recommendation isParadigm Peptides.