Similar to Creapure creatine monohydrate, when research scientists and organizations see that something actually “works”, you start to see more and more studies conducted on that particular substance.  And in this case, we see another study on beet root juice and/or powder.

Suppversity is one of the best places to go for research studies on supplements.  Ergo-log is not bad either but I think Suppversity puts them out more frequently.  Recently Suppversity posted an article about beet root liquid, and its relationship to insulin spikes and mouthwash.

In the study that Suppversity mentions it was found that people that drank beet root juice and high carb meals has less of an insulin spike, which is good if you want to stay lean or even lose weight.  You would want to drink beet root juice or supplement with Tectanic Red pre-meal or during the meal.

Next, the Suppversity article mentioned something that I mentioned previously, and that you should NOT drink mouthwash when supplementing with Tectanic Red.  And quite frankly, I would not recommend using a mouthwash that is similar to common mouthwashes like Listerine.

In addition I found some other studies that showed the benefits of using inorganic nitrates at frequent and adequate doses.

Check out this study.

3 Months Of Nitrate Plus Exercise Training Increases Performance More Than Training Alone In Peripheral Arterial Disease: 2409 Board #7 June 3, 9: 30 AM – 11: 30 AM. 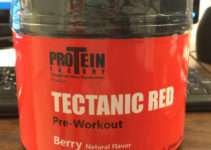